Even a fake smile makes a person positive

Since childhood, we have heard about the benefits of smiling for people. Many people around the world, Frank Sinatra, Katy Perry, and other famous artists, sing about the power of a smile: the way it lifts your spirit, changes your outlook and generally makes you feel better. But does all this have scientific proof? A new study by scientists at the University of South Australia has shown that a smile, even an imitation, can make your mind feel 'more positive'. An article about this has been published in the journal Experimental Psychology.

A team of researchers scrutinized how a fake smile affects the perception of the face and body language. The experiment involved 136 volunteers aged between 18 and 50 years. They needed to clamp a pencil between their teeth to make their facial muscles mimic the movement of a wide smile. They were then shown a video showing a person they didn't know: the participants had to rapidly assess people’s facial expressions and movements on a special scale - by these criteria, they could determine the emotional state of the person. 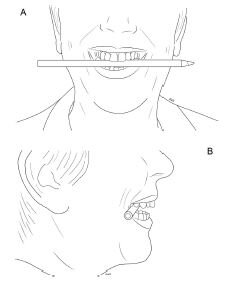 An illustration of how the participants held a pencil to imitate a smile. Photo: Daniela A´lvarez, 2020

It turned out that it did not matter whether a real smile or fake, in any case, it influenced not only the person but also on his assessment of others, causing more positive emotions. The authors explain: when we strain the muscles of the face to smile, it is as if everything around us is lit up with joy and people around us seem happier.

The leading author of the study, Dr. Fernando Marmolejo-Ramos, believes that this discovery is important for mental health.

"When your muscles say you are happy, you have a better chance of seeing the world around you in a positive way," says the scientist. - In our study, we found that when you train to smile, it stimulates the almond-shaped body, the "emotional center of the brain," which releases neurotransmitters to maintain a positive state. It has interesting implications for the psyche. If we can deceive the brain and make it perceive the stimuli as 'happy', then we can potentially use this mechanism to improve mental health.

A smile or grimace helps reduce needle pain by 40%

The arrival of the cold traditionally means that it's time ...

Laugh more: Scientists have identified a connection between laughter and health in old age

A team of researchers from the University of Nagoya, Japan ...

Walking along water is useful for mental health

Living near the blue space environment - any reservoirs, large and ...

Grandchildren can save grandparents from loneliness and social isolation

Experts from the University clinic of Hamburg-Eppendorf (Germany) surveyed 3 ...

Listening to your body makes a positive body image

Awareness of how the body works and attentiveness to feelings ...

The rate of recovery from injury depends on epigenetic factors

Why do some people recover rapidly from stress factors, while ...

In a study published in the Journal of the American ...

Scientists at the University of California have found that working ...

Child trauma adversely affects the physical and mental health of ...