Yonge Mingyur Rinpoche is a Tibetan monk, a renowned practitioner and meditation teacher who began meditating in early childhood. Experts from the University of Wisconsin (USA) have studied for many years how meditative practice affects the monk's brain and have performed MRI scans several times. The brain of 41-year-old Yonge Mingjura Rinpoche was found to look like that of a 33-year-old man in the scans. As the experts explain, meditation is likely to really slow down biological aging. The study has been published in the journal Neurocase.

The scientific work carried out by the American scientists summarizes the experience of 14 years of observation, and it began at the time when the monk was 27 years old. At that time, Rinpoche's brain was scanned four times. The results were compared to more than a hundred pictures of the brain of his peers in the control group.

The researchers trained the MRI algorithm to determine a person's age based on their brain's gray matter structure.

The analysis showed that Yonge Mingyur Rinpoche's brain is aging slower than that of the control group. At the age of 41, he is 33 years old. And, as the scientists noted, this difference is not due to "youthfulness" of only a single structure - the gray matter of the brain has been changed diffusely. 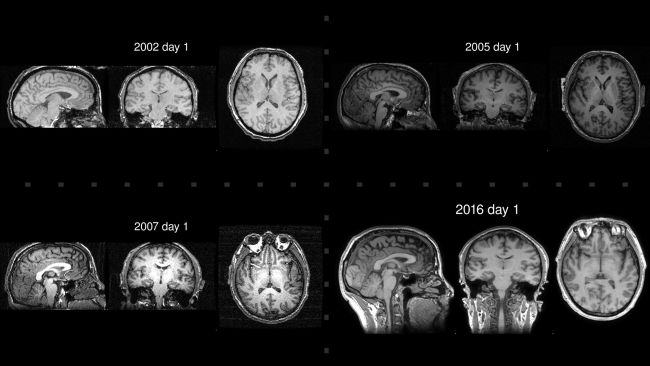 The algorithm also discovered another interesting thing: it turned out that the brain of Yonge Mingjura Rinpoche "had matured before".

"Some parts of the brain start at the age of 25-30 years. For example, the areas that are responsible for self-control, attention control. It's possible that these areas ripen earlier because of meditation. That sounds reasonable because you know that meditation strengthens them," said Richard Davidson, lead author of the study, Professor of Psychology and Psychiatry at the University of Wisconsin and founder and director of the Center for a Healthy Mind.

This study has lots of limitations. For example, the brain of only one person is studied here, and it is not clear how much meditation is actually needed to make such changes in the gray matter. It is also worth considering that the "youthfulness" of Yonge Mingjura Rinpoche's brain may have been affected by other factors, such as highland life, a clean environment, good nutrition, and intermittent fasting. To better understand this, more research is needed with groups of people living in similar living conditions.

Researchers from the University of Singapore found that bilingualism has ...

The brain can only perceive someone else's death, not its own

Everyone knows that he will die, but this knowledge is ...

Scientists from the University of Illinois (USA) analyzed the results ...

Scientists at the University of California have taken another step ...

American researchers believe it's never too late to start doing ...

Scientists at the Centre for Healthy Brain Aging (University of ...

American company Humm has released an electric stimulation device that ...

Brain cells that control the “body's time” have been detected

Scientists at Southwestern University in the United States have identified ...

Forecast: climate change will lead to a 25-50% decline of thinking abilities

Being in a stuffy room has a bad effect on ...