Donor lung transplantation is a fairly common and demanded procedure. The problem is that the lungs can only stay viable outside the human body for a very short time. And even creating special conditions - placing a mixture of oxygen and nutrients into a glass dome and 'pumping' through it does not solve the problem: only about 20% of lungs received from donors are suitable for transplantation. Scientists at Vanderbilt University and Columbia University (USA) have solved the issue by adding donor organs to the bloodstream of live pigs.

During the experiment, specialists connected six human lungs with multiple lesions to the vessels around the animal's neck. At the same time, one of the organs had been outside the body in the artificial supply system for more than a day by the time the study began: the tissue of this lung had as many damaged areas as possible. Five pigs participating in the experiment were injected with drugs suppressing the immune system activity to prevent rejection; one animal was tested without immunosuppressants. 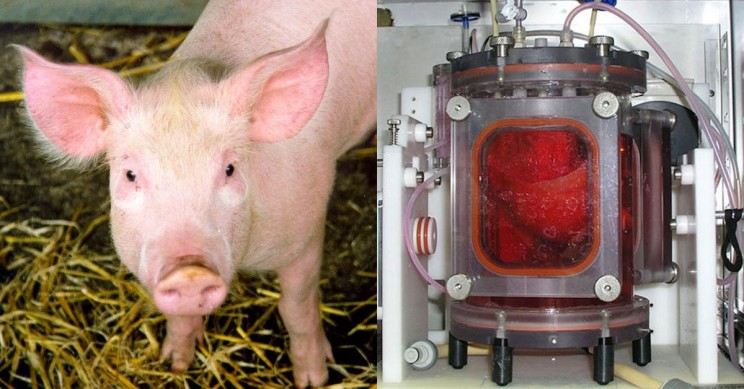 Pig's blood and air were "pumped" through the donor's lungs. After 24 hours, it turned out that five of the six organs remained viable. The condition of the lung "connected" to the pig, which had not been injected with immunosuppressants, worsened: it was rejected by the animal's body soon after the procedure began.

It turned out that the amount of damage to organ tissue had been significantly reduced, including the lung, which at the time of the experiment had been outside the body for a long time. Experts noted that all lungs, except the rejected ones, were suitable for transplantation.

In the near future, experts plan to conduct a more extensive study. If successful, the method of preserving the vitality of organs by connecting them to the bloodstream of pigs may become widespread: for this purpose, special animals will be used that do not have dangerous infections for humans. At the same time, the question of the impact on the human body of pig immune cells, which will inevitably penetrate into the lungs during the procedure, remains open.

Today there are tons of information about healthy diets. Scientists' ...

Magnetic encephalography (MEG) is a method of measuring and recording ...

Scientists from IBM's Japanese division have developed a guide robot ...

The chip in the brain, the transducer on the skin: scientists returned the lost sensitivity to the hand

Scientists at the Battelle Memorial Institute (USA) have developed  ...

Biorobots are hybrid mechanisms that include both living tissue and ...

Researchers from the University of Sydney (Australia) conducted experiments on ...