A previously unknown organ, the tubular salivary glands, was found in the human body

Medical researchers from the Netherlands made an unexpected discovery in the field of anatomy: they found salivary glands in the human nasopharynx, which scientists have so far overlooked. An article about it has been published in the journal Radiotherapy and Oncology.

The new organ was randomly identified by Dutch doctors after analyzing PET/CT scans of patients with prostate cancer. An autopsy of two bodies (male and female) also confirmed the existence of an additional salivary gland pair. 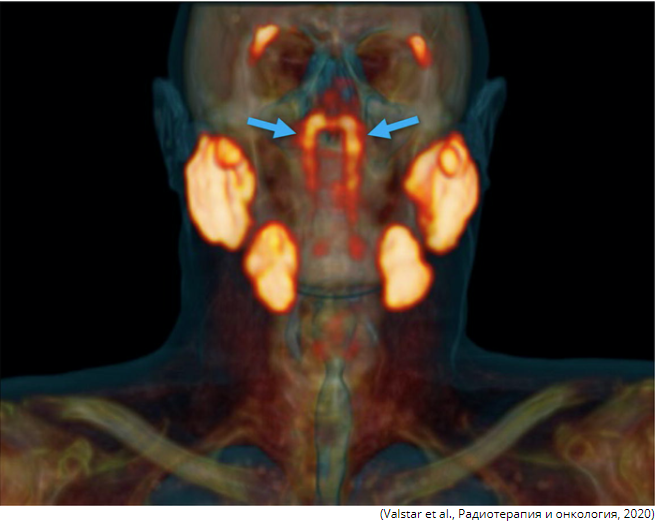 The salivary glands are located in the oral cavity and secrete saliva, which is necessary for normal operation of the digestive system. In this case, most of the fluid is produced by three pairs of glands - parotid, submandibular and hyoid. Also, a person has about a thousand salivary glands in the mucous membrane of the tongue, palate, cheeks and lips, but they are very small and almost impossible to see without a microscope.

A new discovery shows that there is a fourth pair of salivary glands, located behind the nose and above the palate, in the very center of the human head.

Scientists have called them tubular glands, as they are located above the torus tubarius (an elevation in the nose part of the throat, which contains the cartilage of the eustachian tube).

These new salivary glands are another area that radiation therapy should bypass, doctors say, because it can damage them. According to preliminary data, based on the analysis of 723 patients with oncology who underwent such therapy, radiation that affected this organ leads to serious complications: for example, the development of xerostomy (dry mouth, disturbing speech and swallowing, wearing dentures, worsening oral hygiene) or dysphagia (a disorder of the act of swallowing).

This discovery offers hope for a reduction in the side effects of radiation therapy, as well as the development of more accurate radiation targeting methods.

According to a new study by American scientists published in ...

Researchers at the Dayney-Farber Cancer Institute found that daily consumption ...

Scientists have found plastic in the kidneys, liver, and lungs: it increases cancer risk

Every week about five grams of plastic enter the body ...

Researchers at the University of Illinois at Urbana-Champaign (USA) found ...

Researchers from the University of Loma Linda (USA) believe that ...

Specialists from the Japanese company Hirotsu Bio Science have developed ...

Researchers from the University of Cardiff (UK) found a special ...

The use of chili pepper reduces the risk of a ...

The place where a child grows can affect his health ...